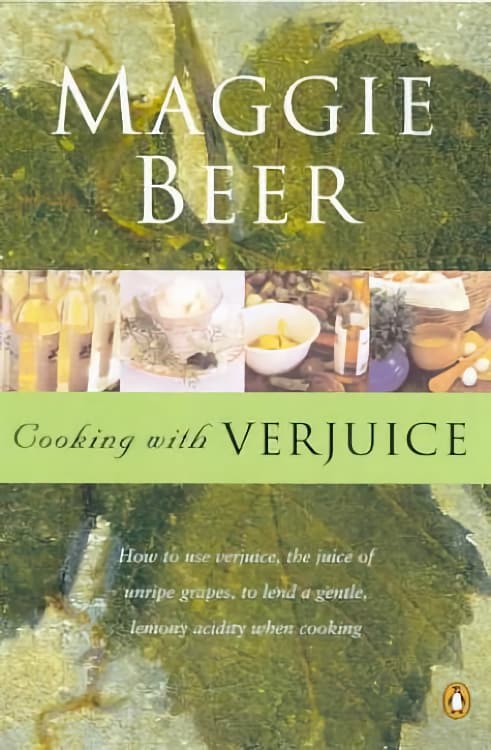 In Cooking with Verjuice, Maggie Beer introduces us to Verjuice, a product that she is very passionate about. Maggie, whom is now famous as the cook on The Cook and the Chef, started producing verjuice in 1984. By doing so, she has been the reason for its introduction to Australia and most likely the reintroduction in its more traditional home of France, Spain and Italy.

So, what is verjuice? Well, according to the introduction, verjuice is the juice of unripened grapes. It is a ingredient that is used to deglaze or add sharpness to vinaigrettes. It has, also, been used in cooking for a very long time. While Maggie believes that it dates from the Roman times, the earliest reference she has found dates from 1375, in 'Le Viandier' by Taillevent, the Master Cook to King Charles V.

To demonstrate the versatility of verjuice, you need only look at the wide range of recipes that are present in Maggie's book. The recipes range from vegetables, fish and shellfish, poultry and game, meat, sauces and condiments and finally desserts. All the classic dishes are there, like Fillet of Pork with Sage and Verjuice and Partridge with Savoy Cabbage, Pancetta, Walnuts and Verjuice. Along side them are some surprises like Scallops with Verjuice Butter Sauce and Verjuice Sorbet.

Verjuice is a very versitile ingredient, and in Maggie Beer's book, we see just how versitile it is. The book is full of ideas to start you cooking with verjuice, so grab a copy of the book, get some of Maggie's Verjuice and start cooking!