Taste Australia: an inspired cuisine from country to coast 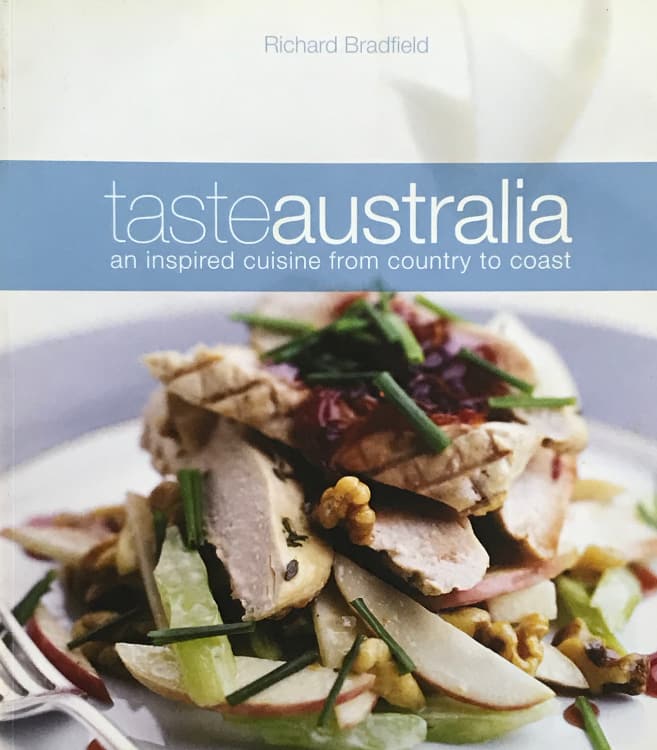 Think of food, and you think of home and all those meals that your Mum and Dad prepared for you. Think of dining, and you are likely to think of Italian, French, Chinese or the like. It is rare to hear someone say 'lets go for an Australian.' Now, as our regular readers will know, there are lots of recipes that are Australian based, that have taken influences from that vast melting pot of cultures and people that represents Australia's makeup. So, it is refreshing to review an Australian cookery book that talks of 'Aussie' Cuisine. In Richard Bradfield's book, Taste Australia: an inspired cuisine from country to coast, there is no pretence about it. The book firmly stamps itself as a book that is Australian, with Australian recipes.

In reviewing Richard's book, I was immediately impressed with the style that, while understated, is both beautiful and easy to follow. Each recipe is presented in a way that will entice the reader. Even for me, a hardened Cookery Book Reviewer, the presentation has whet my appetite, where I am inspired to cook them.

The book covers from Breakfast to Dinner, with many delicious treats. Eating is not always formal, so the first chapter is Brekky and brunch, which is, by its nature, it is informal, where friends and family gather to share some food. The other subjects covered are: Tasters and Starters, Comfort Food, For Lazy Days and Summer Nights, Barbeque Glory, Afternoon Tea and Dessert Favourites.

So which recipes make it in Brekky and Brunch? Well, Richard has brought you some that represent the healthy lifestyle, like Warm Muesli with Dried Fruit and Yogurt or Caramelised Fruit Salad with Sweet Mint Yogurt. For the traditionalist, the Australian Shearer's Breakfast with Virgin Mary Sauce is to die for. The final one I will mention from the Brekky and Brunch chapter is the Atlantic Salmon and Sweet Onion Rice Congee. To my mind, this demonstrates the essence of Australian Cuisine, taking a classic breakfast dish and infusing asian ingredients to create a totally new style.

Promising not to go on too much, but I want to select recipes from two other chapters, being from For Lazy Days and Summer Nights and Barbeque Glory. The first recipe I have selected is Dukkah-Crumbed Buffalo Escallops with Pepper Sauce and Tabbouleh. Why that dish? Well, for me this is a truly cosmopolitan dish. Its influences are Middle Eastern, with the meat from a South-East Asian Buffalo and has a Lebanese Tabbouleh. Now, as a teenager, I can remember first trying Tabbouleh at the home of Philip Ruddock, our local MP. His wife had made it for some event, and it was a revelation to me, whom had been brough up on far less adventurous food as a child. The final recipe is Seared Chilli-Soy Snapper with Braised Bok Choy. If there is a way to understand the diverse nature of Australian cuisine, then this dish demonstrates it. Simply prepared, clean tastes of fusion cooking that makes the food great!