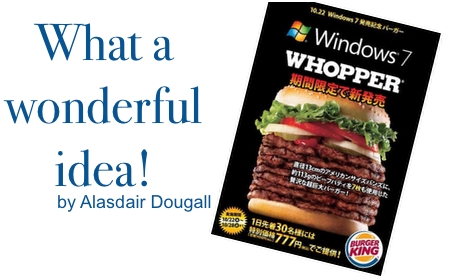 Here at bare ingredients, we believe food should be seasonal, it should be sustainable, and what you eat should always be good. So, when I was sent a link to another fast food promotion, this time in Japan, I thought it was another one of those 'predictable' special offers. Well, it was one of those special offers, but this time it is one to promote Microsoft’s newly release 'Windows 7'!

Why one of the best known technology companies has to use fast food to promote its operating system is beyond my comprehension. The fact this burger is so disgustingly big, with seven meat patties is more likely to draw ridicule that sales. It shows that those who think up these ‘wonderful’ ideas are so out of touch with the health effects of fast food, rapidly increasing food prices, shortages and, lastly, the exploitation of farmers.

No, even if I lived in Japan, I would not be visiting Burger King to buy one of the Windows 7 Whoppers. To me, it shows such bad taste that only the greedy and the stupid would want to buy it. So, why did Burger King come up with such a burger? It wouldn't have been for the sheer joy of Microsoft releasing a new version of Windows, would it? No, I think what we are seeing is a marketing concept that has totally missed the mark.

In summary, Burger King’s Windows 7 Whopper serves two purposes. It shows us that mixing food with technology fails to make the grade. Those who don’t believe the Windows operating system hype will point to the fact that this big, bloated burger is a perfect metaphor for what Windows is about. It also shows how little concern Burger King has for their customers. They will argue that they don’t encourage their customers to buy over-sized burgers, but is that true? After all, a nice bit of salad on top, so it must be healthy, mustn't it? Added to the nice glossy photo and we could argue that Burger King uses subtle means to get their customers to buy their offerings.

Note: All trademarks are the property of their respective owners.

No real explanation required. The home of Microsoft and all things Windows.

The official site for Burger King. Need we say any more?

Want to know more about the way Fast Food is changing the way the world eats? Then visit this Wikipedia page as a good starting point.

Bad Side of Fast Food

An article that looks at the effect on health of fast food. Great read!