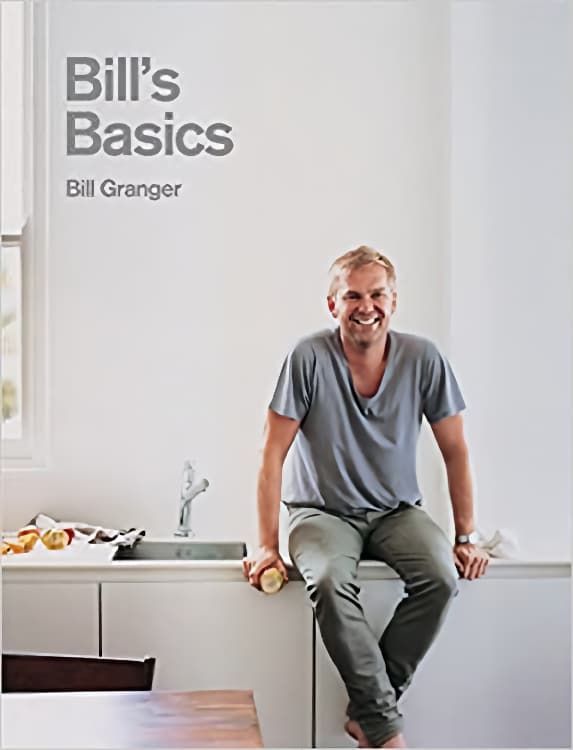 Bill Granger, that much loved TV cook, has put together Bill's Basics, which follows the trend to simplifying the recipes to a point that lets anyone manage to cook his dishes. Upfront, I don't always believe that this approach works out, but it certainly means that novices will feel far more confident taking on dishes they haven't tried before with a much better chance of success. That is a good thing, for it will serve to encourage them to break out of the norm and try their hand at different dishes.

Setting my reservations aside, what does Bill's Basics bring us? Well, as always, Bill's books are a lovely collection of recipes that he has discovered over the years, some classics from his restaurant, some discovered on his travels. He has divided these into: Breakfast, Baking, Soups, Salads, Rice, pasta and bread, Chicken, Meat, Seafood, Vegetables and, final, Desserts. If you already own other books from Bill Granger, you will know this layout, which works well in presenting recipes in some sense of order.

Bill's breakfasts are simply great. The recipes presented are no fuss cooking at its tastiest, as in Pancakes, served with berries, yoghurt or maple syrup, Kedgeree, made in a simplified manner, and hash browns. The point is that the recipes are quick and easy to prepare, making the choice to cook them over packet cereal an easy one.

The other chapters follow the style that we find in the Breakfast chapter, with most of the 100 recipes being very easy to prepare, and only a few slightly more complex. So, the recipe for Perfect steak is there because it is too easy to assume everyone knows how to cook steaks to rare, medium or well done. Other dishes are take a bit more effort, as with Lamb curry with yoghurt and tomatoes, Saffron risotto with lobster and Double-baked soufflés with goats cheese and leek, but they are certainly worth the time to cook. Hopefully, the extract above gives you the flavour of the recipes that are found in the book.

Bill's basics is a book full of lovely recipes. While I had my doubts, the fact my daughter is keen on the recipes and wants to try to make them, leads me to believe this is destined to become a true every-day cookery book found in the kitchen, not the bookshelf. There is plenty of variety and styles of recipes that are easy to prepare. Yes it is basic, but tasty, and that is the point.