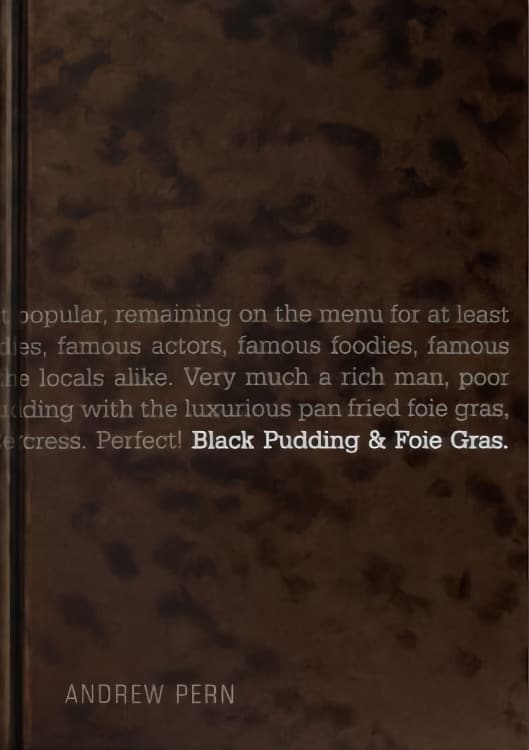 Black Pudding & Foie Gras is the name of The Star Inn's best selling dish, enjoyed by the famous and locals alike. It is also a great example of Andrew Pern's combination of luxury and every day ingredients to create dishes, rightly named as rich man, poor man food.

Andrew Pern is renowned as one of Britian's great chefs. At his British gastropub "The Star Inn", he prepares traditional food with his own creativity and originality with which he has been rewarded with a michelin star. In this book Andrew Perns takes the reader on a journey through the seasons at "The Star Inn", the abundance of local produce and the lack there of. Such as winters limited fish supplies resulting in creative dishes with what is available and the use of more cured and smoked fish. While in Autumn an excess in apples resulted in "The Star Inn Scrumpy".

With an understanding of the importance of fresh local seasonal ingredients he has dedicated chapter soley to his very special network of local suppliers with which his restuarant wouldn't be what it is today without.

There are plenty of enticing recipes that are clear to follow with attention to detail. Recipes aren't complicated but inspiring. Ideas include: for starters "Risotto of Local-Shot Partridge with Braised Chestnuts, Black Trumpet Mushrooms, Wilted Curly Kale and White Truffle Oil", for main "Lasagne of North Sea Lobster with Leeks and Kirkhams Mature Lancashire", and for dessert " Rich Dark Chocolate and Orange Tart with Satsuma Sorbet".

This book is handsomely presented with an easy flowing narrative and bold photographs that bring Yorkshire rural life, produce and The Star Inn alive. A fabulous book for those who enjoy cooking with seasonal local ingredients to create great tasting food whatever the time of year.