Chocolate Nations: Living and Dying for Cocoa in West Africa 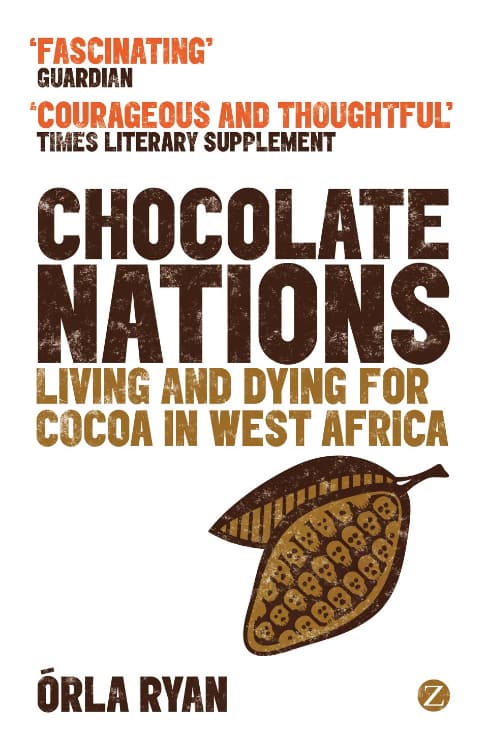 Orla Ryan is a well-travelled financial and investigative journalist who lived in Africa for four years (Uganda and Ghana). Currently writing for the Financial Times in London, during the time of this book she was commissioned to Reuters and this project came out of a special grant for investigative reporting. During her time in Ghana, she was specifically focused on the cacao industry. The fundament of her book is about exposing the realities of the daily work program and calling on better education and a less corrupt government.

The book is a good eye opener for those who love chocolate and want to inform themselves more about the complexity of the environment of cacao farming in West Africa. Given that there are almost two million small producers in West Africa, who farm and produce about two thirds of the total world cacao crop these are highly significant stories to tell. Not just from the economics, but the human aspect. For perspective fifty percent of the world's cacao beans come from Ghana, the world's second-biggest producer, and its neighbour Ivory Coast, the world's biggest.

You want to read her work because she’s not emotional, but rather factual about the description. Giving a fair say to everyone involved. You might find it difficult to read as it looks at the causes of farmer poverty, and you’ll see an almost helpless role within the context of global commodity trading and the simple farmer’s daily battle to just live from his crops. Economic and geopolitical analysis with the human touch, it gives you a clear view of what is going on with the majority of chocolate.

It is a quick read, eight chapters in 160 pages. Weekend reading, where you will probably clean your cupboards out thereafter.

You’ll read that for every £1 chocolate bar, just 7p is spent on cocoa ingredients, while 43p goes to the manufacturer. You’ll look for justice. And hopefully, start within yourself. What gifts you give, what snacks you enjoy, and just start looking at the back of pack a little more. Typical cacao farmers receive just 4 per cent of the final price of an average bar of milk chocolate in Europe.

Ryan’s book gives you a background on Ghana and Cote d'Ivoire cacao farming histories, and then highlight where and how child labour is used on cocoa farms (specifically child and slave labour). Stories of government and cacao board corruption, the role of international traders who come to town to try and help. She shows how unfair Fair Trade is and that in current economics, there is dwindling futures for chocolate, by simply no-one wanting to go into the business anymore.

"Orla's Chocolate Nations is a captivating read, painting a lively picture of the West African cocoa trade from a variety of perspectives. It casts a critical eye over the role played by governments and multinationals, while also putting fair trade and child slavery campaigns in perspective. It gives us all a good deal more to think about when we eat "the food of the gods".' - Daniel Balint Kurti at Global Witness

"A courageous and thoughtful account of a murky industry." - Times Literary Supplement

"Chocolate Nations is a fascinating account of the struggles of cocoa producers in West Africa, almost all of them smallholders, and what it takes to turn a crop of cocoa into a warehouse full of Ferrero Rocher." - Jeremy Harding, The Guardian