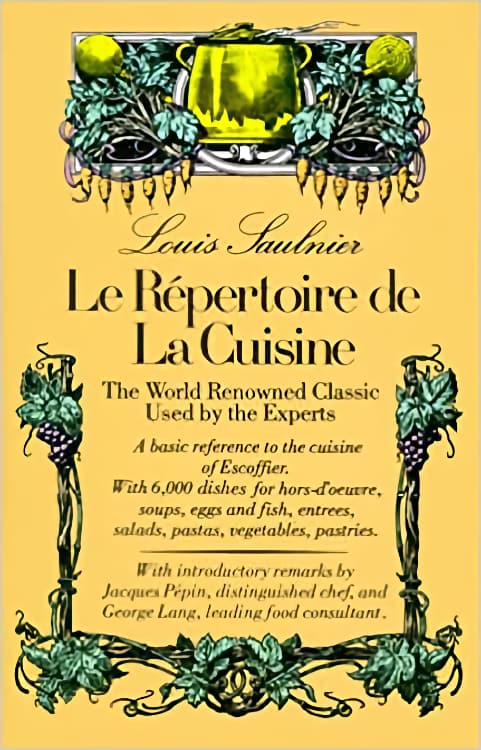 Le Repertoire de La Cuisine is a book that lists over 6,000 recipes. It contains the collective works of many chefs, but it was Escoffier that conceived the idea and was its main contributor. It was first published in 1914 it rapidly became the de facto standard reference for chefs the world over.

For every trained chef will tell you, it is one of the essential references that you have to own. It is required by most catering collages, and therefore holds a special place in the hearts and minds of many chefs. So why? Well, there has been much work been put into the book, as it contains many recipes sorted in 12 sections. They are, using their translations: Fonds de cuisine (Fundamental elements of cooking), Garnitures et Sauces (Garnishes and Sauces) Hors-d'æuvre, Potage (Soups), Œufs (Eggs), Poissons (Fish), Entrées d'Abats, Entrées Volantes (Entrées of Abats, Poultry and Game), Entrées, Relevés, Rôtis (Relevés, Entrées of Butchers' Meat), Salades (Salads), Légumes et Pâtes Alimentaires (Vegetables and Farinaceous Products), Entremets (Sweets [Desserts]) and Savouries.

The recipes are arrange in a logical manner, where you can quickly locate the principle ingredient and all associated recipes with it. Each recipe consists of one or two lines, so don't expect a full recipe. If you looked up Sole and Sole Fillets has over one hundred recipes listed under it, where Crevettes - Shrimps and Prawns only list six recipes. There is the only issue with this excellent reference, for unbeknown to the French, there is many crevette recipes that exist outside of France cuisine.

We can't stress how valuable this reference is. It is one reference you have to own if you are serious about cookery and cooking.