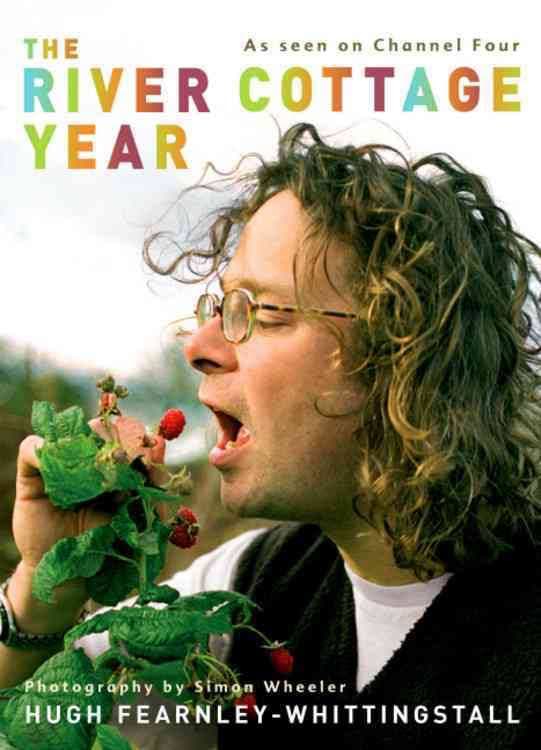 Hugh Fearnley-Whittingstall is a staunch believer in nature's larder, not what you find on the supermarket shelves. His first television series Wild Food shocked many viewers as he went round the countryside eating wild food including animals (of course his critics never consider the horrendous process involved in raising and slaughtering battery chickens that they buy from supermarket, just because they are cheaper than organic ones.) His River Cottage programs that followed lead to his great popularity.

The book The River Cottage Cookbook won him 2002 Glenfiddich Trophy, The André Simon Food Book of the Year and The Guild of Food Writers' Micheal Smith Award. This book follows on with an excellent collection of seasonal recipes and guide to seasonal produce.

Through his book Hugh Fearnely-Whittingstall hopes to encourage readers to chose quality seasonal food from small farms and the wild instead of from the supermarket giants. The book is written in months of the year rather than the four seasons, reflecting more the time of the year and how it effects what we eat, eg., in February most of us are sick of a long cold winter, so warming comfort food is what is called for.

Each month is introduced with his personal look at the season with plenty of advice to help you make the most of what nature has to offer. The Recipes are down to earth and very easy to follow, June's recipes include Mackerel with Melted Onions and Black Olives and Gooseberry Ice-Cream, while in the cold month of January Woodcock on Toast and Tipsy Fruity Rolly Polly Pudding feature. The book is full of great natural photograph by Simon Wheeler who brings the countryside and food to life.

Hugh Fearnley-Whitingstall has created a really down to earth seasonal cookbook, that will encourage foodlovers to think again about what they eat.