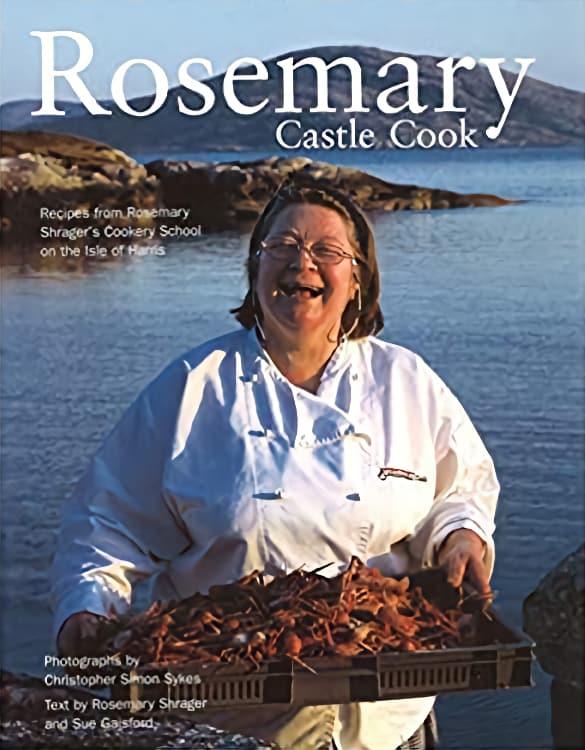 Rosemary Shrager is mainly a self taught cook, whose passion for food and perfection has led to her becoming extremely accomplished. She has worked for and gained respect from chefs including Pierre Koffman and Jean-Christophe Novelli. Rosemary went to cook for one season on the Isle of Harris and fell in love with the place and its amazing fresh ingredients, including an abundance of seafood, lamb and venison. She now runs a cookery course at Ambuinnsuidhe Castle on the Isle of Harris.

Unlike most books, recipes are not broken down into starters, mains and desserts. Instead, Rosemary has opted to concentrate on ingredients eg. shellfish, fish, chicken and rabbit etc. This has allowed her to describe individual ingredients, clearly explaining their preparation and cooking, followed by some delicious recipes. Rosemary's recipes are mainly traditional and modern European with one or two East Asian dishes. They show a strong influence from Scottish cuisine, and the exciting ingredients of the Isle of Harris. Dishes include Smoked Haddock Tartare, Saddle of Rabbit, with Chicken Mousse and Black Pudding, Umbrian Duck (preserved duck, served thinly sliced) and Medallions of Venison with Spinach and Morel Sauce, among many more mouth watering dishes. Recipes are all accompanied with stunning photographs (always a bonus when you are deciding what to try).

Rosemary Shrager has won an honoured place among my many hundreds of cookbooks. It will encourage myself and any who choose to buy it to make the most of our local ingredients or to try something new.