Our market is the oldest running certified organic market in Australia. This December we will have been running for a decade. Our original aim was to run a wholesale and retail market. We have a dedicated following of retail shoppers some of whom have learnt enough from the growers who sell here to go on and grow their own vegetables ... they still return each week for the community as much as the produce on sale. It is a child friendly venue with great parking. 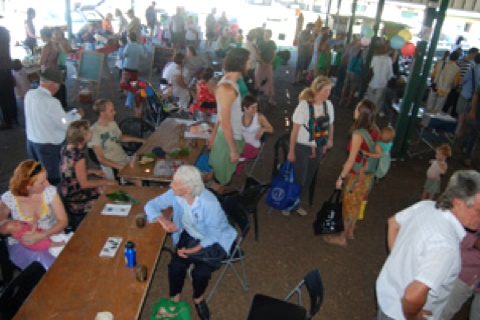 The majority of our stall holders are growers themselves, and they mostly come from less than 50 km away .. so the produce is seasonal. We do have two wholesale stall holders who supply vegetable and fruit from further afield as well as some value added goods such as dried fruit and rolled cereals. There is also a fairly regular organic cosmetics stall. We have macadamia nuts and butter, sunflower sprouts, seedlings, avocados, beetroot, asparagus, wheat-grass shots and trays of wheat-grass, bananas, paw paw, heritage potatoes, beans, carrots, cucumber, kale, ceylon spinach, kang kong. coriander, basil, thyme, marjoram, oregano, lettuces, tomatoes, chokoes and much much more. We also have our very own South India Dosas made on site and beautiful cakes and coffee.

One of our major stall holders is Rod Bruin of Summit Organics, in the last 8 months he has managed to stop selling to the Sydney and Melbourne markets and just services the local region (of about 100km radius) which includes Brisbane. He is working hard to teach his customers that produce availability should dictate diet .. for example in this region lettuces don't grow at all well in the wet summer so he has started to grow crops more suited to the climate such as Kang Kong, Ceylon Spinach and Egyptian spinach to name a few. As he mans his own stall he is able to explain to his customers why they can't get the lettuce they want and what is so good and the nutritional value of the produce he does supply.